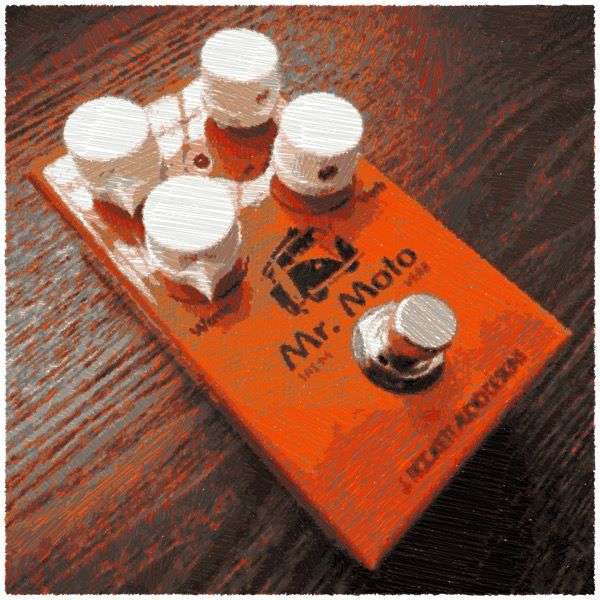 For those looking to enhance the sound of their tongue drum for live performance or recording (rather than morphing it into something else entirely) a combo tremolo/reverb pedal may be all you need. Mr. Moto puts these two classic ’60s-amp effects into one pedal: a thickening and dimensional spring reverb and a poetic tremolo. The pedal can really sweeten the sound of a tongue drum without overpowering its natural beauty.

Mr. Moto was a Japanese secret agent (played by Peter Lore with his Austrian accent) in eight, popular, pre-WWII films that introduced America to the Martial Arts. According to Chris Van Tassel of J. Rockett, Mr. Moto later became the title for a 1961 surf anthem by the Belairs. Along with the VW surf van graphic on the metal flake orange pedal, this box is spot-on for the surf sound it was built for. While you might not think Mr. Moto’s effects would befit a tongue drum, it adds a full and rhythmical sound, without overstating itself or overstaying its welcome.

Why is tremolo so effective with tongue drum?

A tremolo is a very different modulation effect, working more on overall volume. With the depth low, Mr. Moto’s beautifully-smooth sine wave can give a subtle rhythmic waver to bell-like strikes. Even the square-wave setting has smooth rises and falls. Crank up the reverb and things get even more interesting, with the tremolo sweeping the volume and the constant level of the reverb revealing itself in the valleys. Strike the shell outside of the tongues on your drum (which generates sound from the body as well as the tongues) and you get even more movement.

One of the problems with tremolos is that most boost the signal on the up cycle as much as they drop it on the down cycle. This can lead to obnoxiously-loud strikes that you have to temper by playing softly. Mr. Moto, by contrast, eliminates this problem by just dropping the signal. Playing is much more predictable and smooth no matter how soft or hard you play.

If looking for a natural-sounding, always-on enhancement, set all the tremolo knobs to 9a and the sound subtly modulates. Note that at this setting, you’ll only notice tremolo on the sustained notes.

With just a volume knob, it might appear that reverb was added as an afterthought to Mr. Moto, but that’s not the case. Rockett may be the most convincing implementers of the Belton Brick module that was built to emulate a three-spring, tank reverb. The decay and dwell are fixed like on those old Fender amps. According to J. Rockett, comparing Mr. Moto’s reverb to their exquisite Boing reverb (built on the same Belton) it: “gets a bit more splashy, just a tad bit more effect overall.”

The reverb has a touch of natural modulation just like the Fender amps. It’s created by slight difference in length of the three cascading delay chips in the module. The short, 2.5-second decay adds ambience to staccato playing, but doesn’t get in the way as the notes of your idiopan naturally die out. While it never gets overbearing in the mix, you’ll probably find yourself setting the Reverb knob to about 2pm. Without lingering in decay, Mr. Moto’s reverb gives you a bit of added dimension and a slightly wet environment without taking away any of the natural nuance of your tongue drum. It’s an excellent always-on reverb. To turn the tremolo off and just use the reverb, drop the Depth knob to 7a.

Mr. Moto puts the trem before the reverb. This is the opposite of those only Fender amps. A big advantage of the Rockett configuration is that even deep, square-wave tremolo, where the trem completely cuts the volume on the down cycle, sounds smoother: It has the acoustically-natural reverb to fill that hole.

Getting extreme: Settings for faux delay and swells

Though tremolo often gets classified as the simplest effect, wide parameter controls on Mr. Moto give it a it lot of versatility. There’s a learning curve on when to strike, but these are great effects:

Mixing your modulation: The chorus illusion.

The early effect of tremolo has a fascinating magic that the pedal world recently rediscovered. Tube amps could achieve the effect in a few different ways that massaged the volume, frequencies and overall sound. Add some reverb after that and the slightly delayed and modulated signal creates even more gentle modulation. Here’s a setting on Mr. Moto where this effect is more pronounced:

This slowly reduces the volume of the dry to reveal more of the reverb. In those spaces where the two signals change status, you’ll hear a hint of chorus. This will be most obvious when playing with hands.

If you’re not careful, effects can be overpowering and decimate the beautiful sound of a tongue drum or handpan. While Mr. Moto was built to be a surf-guitar-amp-in-a-box, it’s an excellent choice as a kinder, gentler tongue-drum effects package. If you’re looking to enhance your drum, you may find that the subtler settings of both the tremolo and verb can be left always on. On the flip side, if you want some more intense effects, like swells and choppiness, Mr. Moto can handle that too.

Looking for bigger ambience for your tongue drum? Check out the Shift Line Everest M post.

Check out all my tongue drum posts.

How to fry a burger in your waffle maker. Over the last two years I’ve sporadically worked at a manuscript called Waffleiron Chef, a cookbook filled with conventional and unconventional