It just seems logical to me that people would want to shoot RAW photos on their iPhone with the same simplicity as their iPhone Camera app: You tap the shutter and you’re done. But most of the camera apps that shoot RAW have a myriad of controls and readouts that make the shooting process baffling.

It also seems logical to me that people would want the ability to edit those RAW files with tools that can take advantage of all RAW has to offer. Many of the camera apps that shoot RAW can’t edit the files and you’re forced to use a few apps that require you to sign up and sign in before you can edit. 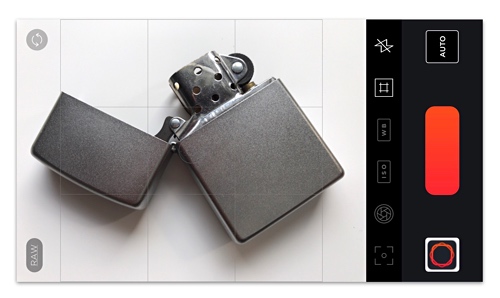 With MuseCam everything is set to auto, so you just press the bright red shutter. That’s it. RAW shooting for us common folk is really here.

You do have complete manual control over (and easy access to) focus (targeting icon), shutter speed (aperature icon), ISO and white balance, all with sliders that are neatly tucked away. But when you want everything to go back to auto, just press that big Auto button. Flash is off by default and you’ll need to tap JPEG to engage RAW.

How to edit RAW in MuseCam.

MuseCam has the most powerful RAW editor I’ve seen in iOS. Each editing control is a simple slider, but there are many controls here you may have never worked with before. To edit a RAW photo in MuseCam from the camera:

Along with a robust set of jpeg editing tools, MuseCam has the following tools designed just for RAW editing:

If you’re familiar with editing RAW in Lightroom, editing in MuseCam will be easy. If you’re not, just start playing to see how each slider affects the image. You’ll soon get an understanding of what each control does and how you can use it to improve your image.

MuseCam’s Presets are a big time saver. With all these controls, saving a set of adjustments as a Preset can give you a head start on your RAW or .jpg editing. For example: you might come up with a really slick set of RAW black and white conversion adjustments that work the deep grays into pure moodiness, something difficult to tweak out of a jpeg. If you’d like to save these control settings as a Preset: Tap the screen > tap the lines icon on the top center > Save as Custom Preset. To access this the next time you edit: Tap the Muse icon on the bottom left > Tap the Custom icon.

There’s endless talk about the value of RAW, but there are reasons many pros never shoot a RAW file and opt for the convenience of shooting jpegs. The purpose of RAW is that you can go back to the original sensor data and craft a 100% perfect final image. On the other hand, .jpg images have 99% of that work done for you by the camera. It’s up to you if that 1% is worth the work. Most people find it’s not, or at least not for every photo.

For a complete understanding of RAW and how iOS handles it, check out this article.

My take on MuseCam.

MuseCam is the first app to combine simple shooting and powerful editing in RAW and does it beautifully. Of course, you can use it to shoot and edit .jpg images as well, with more powerful editing tools than are available in the iPhone’s built-in Photos app. The only things I find wrong with this app:

There are a many reasons not to shoot RAW. In addition to the aforementioned inconvenience of manually editing every RAW image, a RAW file on iPhone takes up about 15 megs of space, approximately four times as much as a .jpg. But we’ve all found ourselves looking though our albums full of jpegs, seeing a great shot that’s just a little less than perfect and saying “Man, I really wish I had a RAW file of that.” MuseCam gives you that ability without having to get a PHD in the app.

Bringing marble sculpture photos to life with the multiply blend in iOS. White marble sculptures (especially reliefs) can look flat and lifeless in natural light. It’s a shame, since these are often amazing, lifelike

How to make two hyphens not equal an em dash in iOS 11. This article has been updated for iOS 13 and iPad OS
All content ©J. Kevin Wolfe