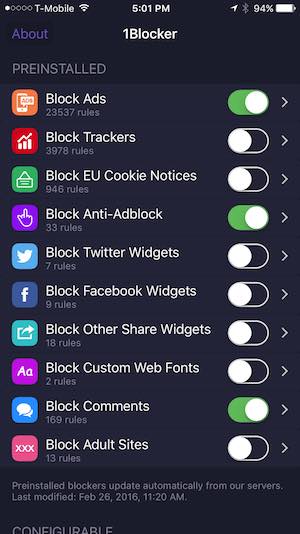 This review is short. The reason for writing it is not.

We must face the reality that we pay for websites to exist. All those ads are what fund the content. In order to make a living and support a staff, the site owner is either advertising something they have to sell or something others have to sell. The problem is that when advertising so voraciously interferes with the content, a website is no longer useful to the reader. The experience becomes one of tolerance and frustration at best and parting of the ways and negative publicity at worst. Pop-ups, pop-overs, pop-unders, delay screens, banner ads, self-playing video spots or ads placed in the middle of a content block are all poorly designed to grab your attention in order to get you to click. And even Scott Cunningham (Senior VP at the Interactive Advertising Bureau) admits * “Looking back now, our scraping of dimes may have cost us dollars in consumer loyalty.”*

Creepy tracking aside, many sites trashed their worth to their reader with an overabundance of ads.

1Blocker to the rescue.

Ad blockers work in Safari on iOS to turn off the ads and add-related technology, like tracking cookies. 1Blocker was one of the first and continues to be one of the simplest and most effective. It’s infinitely configurable, so if you actually find the ads on a particular site useful you can whitelist it. This gives control of your viewing back to you.

Sites that made ad blockers a necessity.

While you think apps like 1Blocker would be a wake up call for sites to find more useful ways to serve wanted ads to their readers, many are instead trying to figure out how to defeat ad blockers. The thinking with many sites is still: if the content is good enough our readers won’t mind us making them suffer the ads. The example of Taxi below is by no means a worst offender. They offer exceptional content, but also make it a total annoyance to view it and seem to be coming up with new methods to force ads on their readers.

In addition to a 15-second delay screen when you first land on their content, there are ads that blend in so well in the middle of the content block that the flow of reading isn’t just interrupted, it’s completely halted while you mentally separate the two. The ads and content links are often clickbait to questionable offers. And there’s this on the mobile version:

A screen with no way to opt out. You’re forced to go to the ad site. Taxi has figured out how to defeat much of the effectiveness of ad blockers. For $60 a year, you can turn off Taxi’s ads: an even more unreasonable annoyance. I used to link to stories on this site regularly in my daily tweets, but I was doing a disservice to my followers by forcing them to endure the Taxi ad-gauntlet, so I’ve discontinued referring to it.

So while sites figure new ways to force you to look at ads, 1Blocker is updated regularly and designed to defeat the latest anti-ad block technology these sites employ to punish you for using an ad blocker.

And the good guys suffer.

Unfortunately with the birth of ad blockers every site is paying for the abuses of the few (well, the few million.) There are many sites out there that do ads reasonably. For example, John Gruber’s Daring Fireball blog uses a tiny ad that’s relevant to his readers served up by The Deck, one of the most reputable ad services. It doesn’t interfere with the enjoyment of his content at all. But some of the ad-blockers want to defeat this as well. (My personal thought is that if someone paid for an ad blocker, they probably never click on an ad anyway.) Interestingly, while 1Blocker filters out much of the noise on Design Taxi, it lets Gruber’s one ad pass through unscathed.

Maybe an even more practical reason for getting 1Blocker is that it effectively allows you to eliminate other unwanted content that sites push on your browser. By filtering out the ads and associated technology you can speed up browsing and reduce data by about 50% with 1Blocker. But you can also take things further by filtering out social widgets, custom fonts, comments and even ignore CSS page elements. So if you hit the same sites on a regular basis, you can customize your visit to only show the elements you want and speed up page loading and minimize data even more. You can go to all that trouble if you want to, or you can just let 1Blocker automatically do its thing.

1Blocker in the App Store

Beko and the tech of Turkish coffee. UPDATE 3/11/17: Beko has a new version. Mostly styling changes from the original. Coffee process slightly improved for an even smoother cup. The pot