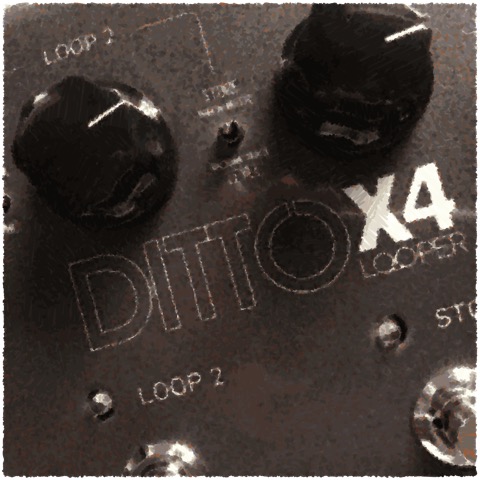 To keep things practical, these tricks cover all the things you can do with your TC Electronic Ditto X4 looper without having to connect it to a computer or a MIDI output.

A few things to note:

How to create seamless loops.

When you begin a recording cold there are no dying notes or reverb and ambience tails at the start. This can make an abrupt seam when the loop recycles. The method below smoothes out dead spots at the start and ends:

How to record different length loops.

One of the best features of the Ditto X4 is that Loop 1 and Loop 2 can be perfectly synced, but different lengths. In the Sync mode, The first layer of Loop 1 will set the timing to say, four seconds. The first layer of Loop 2 will then be four seconds (or a multiple of that) so eight, 12, 16, 20 seconds, etc. This gives you the ability to set up a short rhythm pattern on Loop 1 and use Loop 2 for longer loops or full songs.

How to hide the last layer with undo and redo.

How to stack effects.

You can use multiple effects at once on the Ditto X4.

How to fade-in loops.

The Fade effect can fade in the loops just like it fades them out:

The fade-in of a pad or rhythm loop can be useful for building intensity. Note that the fade affects both loops and the Backing Track so you can’t fade these individually.

How to stutter on beat.

The Hold effect stutters a small section of the loops that are playing. When in the Hold mode, the FX foot-switch also acts as a tap-tempo control to set the length of the stutter. Tap the FX footswitch to the rhythm of the loop a few times. Now during playback when you hold the FX foot-switch to stutter, it will repeat in rhythm with the loops. Note that the Hold effect suspends the loop during the stutter and takes up where it left off when you release the footswitch.

How to create bass.

It’s the opposite of what it seems, but when you record while playing back existing loops with the Double effect, your last loop will be an octave lower on normal playback. Note that you’ll need to play twice as fast and your timing will only be half as accurate when recording at double speed. Also, recording at different speeds can only be done on the second loop layer or later.

How to create high harmonies.

It’s the opposite of what it seems, but when you record while playing back existing loops with the Half effect, your last loop will be an octave higher on normal playback. You have twice the space to play in when recording at half speed, but don’t play excessively. Verbose, sped-up passages can get annoying quickly. Sped-up parts also sound best when recorded at a slightly lower volume. Note that recording at different speeds can only be done on the second loop layer or later.

The two reverse effects below sound best when you transpose the melody, timing and words to learn to play or sing them backwards.

This way when reversed, the effects will come out more harmonious.

How to record in reverse.

To get the melody to come out right for the backwards effect, you need to literally play the melody backward while recording with the Reverse effect engaged. Then on normal playback, your last layer will sound reversed with the melody normal.

On normal playback, only the last layer will be reversed. Note that recording in reverse can only be done on the second loop layer or later.

How to create backwards vocals.

This eerie effect was used by Radiohead on Like Spinning Plates and John Lennon’s chant of “Paul is a dead man, miss him, miss him, miss him” at the end of I’m So Tired. The cool thing is that this effect can be done live with the Ditto X4. Essentially you record the vocal loop in what sounds like gibberish, but on playback it will come out as bizarrely-affected English:

When you tap the Loop 1 foot-switch to stop recording, the loop will immediately play backwards. This can be a dazzling effect with you sing gibberish and it’s immediately repeated as this creepy (but intelligible) passage with the accompaniment playing in reverse. The minimal accompaniment of a shaker or simple chords helps to give the effect a sharper contrast and more haunting quality. This has it’s strongest stage impact if the passage is short, like a song prelude. But it can also be used to record the chorus of a song.

As a variation, this effect can be even more impressive if you record three harmony layers backwards before playing them back in reverse.

How to create a marching beat.

This simulates 100 people marching. It uses simple chunking (mute the strings with the fret hand while strumming.)

The higher-pitched first layer will fade out and the lower-pitched subsequent layers will be at varying volume levels, giving depth. For more variance in the tone of the stomps, place your muting hand at various spots on the strings as you chunk.

How to create “handclaps.”

This simulates a hand-clapping choir. It uses simple chunking (mute the strings with the fret hand while strumming.)

The lower-pitched first layer will fade out and the higher-pitched subsequent layers will be at varying volume levels, giving depth. For more variance in the tone of the claps, place your muting hand at various spots on the strings. This effect sounds best with a long and present reverb.

How to do Frippertronics.

Sounds will continue to layer with early layers slowly fading out until you stop the loop.

How to create tape echo.

How to create an ambient double delay.

This trick uses both loops to create two echo chambers with different lengths. You feed the echo chambers separately by tapping the Loop 1 or Loop 2 footswitch.

A variation is to set Dip Switch 3 on the back of the Ditto X4 to the up position before you start. This puts the echoes out of sync.

How to create an instant-reverse delay.

This works best flor reversing 1 or 2 bar-long solos. The delay gets reversed every time you tap the FX footswitch.

Start playing and you get a nice long delay. Every time you tap the FX footswitch on or off it plays in reverse until you tap again.

How to create a wow echo.

This combines the Tape Echo trick with the Tape Stop effect. Each time you stop and start the effect, you get echoes of pitch dying and reviving:

The effect is greatest when you keep playing and quickly start the effect again before it’s completely stopped. Once you’ve recorded the initial snippet and start recording again overtop, you can add the Double effect to halve the length of the delay for a more pronounced effect. There will be a few beats at double pitch before the loop returns to normal speed.

How to keep a constant rhythm while new layers decay.

The ability to control the decay of your loops on the Ditto X4 is useful for evolving your performances, but sometimes you want a constant (like a rhythm loop or harmony pad) that’s not affected by the decay. This is simple to do by creating a Backing Track, which is stored in a separate memory from the loop and isn’t affected by the Decay function like the loops are:

How to create a stereo performance from mono.

If looping the mono output of your pedalboard, you can record into each channel of the Ditto X4 individually in a different layer by switching your input plug from the Mono Input to the Stereo Input channel. On stereo playback (must have both Output jacks connected) you’ll have discreet sounds in each channel. This can be use for recording a left-and-right harmonies, doubling guitars or dividing stereo-recorded tracks into mono in your DAW. To do this easily live, use an A/B switcher like the JHS Mini A/B just before the Ditto X4 in the pedalchain to quickly change the channel the sound is assigned to.

How to use Ditto X4 as a 4-track recorder.

You can use the Ditto X4 as a primitive 4-track recorder with no looping involved. I’ll note up front that this isn’t the ideal use if the X4, but it does work for creating songs up to six minutes in length. To mixdown directly from the Ditto X4, you’ll need to connect the output(s) to a mono or stereo recorder. Make sure your Ditto X4 is in Sync mode before you begin recording.

Mixdown. Again not ideal, but you can mix down the four tracks to a mono or stereo recorder plugged into the output jacks:

(I did say it was cumbersome.)

You now have four discreet mono or stereo tracks to work with in your DAW. I find it somewhat easier to export by recording the individual tracks with the TC Electronic WireTap Riff Recorder mentioned below.

How to record your performance.

You can export both loops from your Ditto X4 via USB to your desktop, but this limits you to the raw loops and won’t capture performance, effects and layers hidden with the undo trick. The easiest way to record your live-looping performance (complete with effects and mixes) is to stick a TC Electronic WireTap Riff Recorder pedal between your Ditto X4 and your amp. This tiny pedal is can capture an hours-long performance with the tap of a foot-switch in 24-bit mono. You can also use the WireTap to record the individual loops (both with and without the undone layers) and Backing Tracks created on the looper. This gives you up to six tracks to work with in your DAW instead of two.

You can also use this technique to record individual instrument parts of a song by playing the basic rhythm on Loop 1 and recording up to six minutes or parts on Loop 2.

About the TC Electronic’s Ditto X4. Five years ago, TC Electronic’s original Ditto looper popularized looping with its intuitive, one-footswitch interface on a high-quality, 24-bit looper with five minutes of loop time. (It’s still a top-ten-selling pedal today.) The Ditto X4 maintains that dead-simple, one-footswitch operation for recording, looping and playback, while adding stereo, a second loop and ability to play backing tracks and eight effects. It essentially makes this looper its own instrument for both live performance and recording.

Red Panda Lab Tensor Recipes. As with Red Panda’s Particle effect pedal, there’s a learning curve to the Tensor. None of the knobs on the Tensor use the standard,
All content ©J. Kevin Wolfe