So…this $10 waffle maker is the best thing on the market? 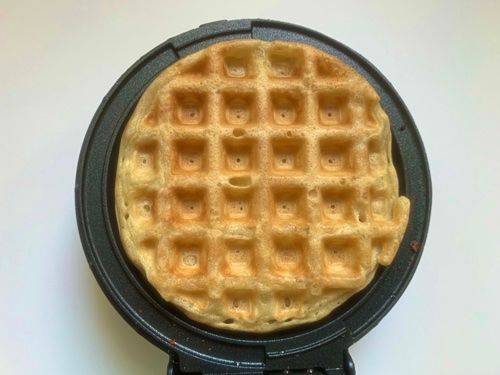 In testing recipes for cookbook #4, I was stymied to find the most consistently golden waffle I’ve come across is from the $10 Dash Mini Waffle Maker. The Dash Mini is an impractical little kitchen appliance, making just one, round, 4-inch waffle at a time. I was curious why stores were always sold out of these things. I though maybe it was an impulse buy, since they’re cute and in multiple colors. Or that parents were buying each of their kids (or college students) one so they can fix their own breakfast on school days. But the real reason seems to be that the Dash Mini makes a great waffle.

Waffleiron manufacturers seem to have forgotten that there’s always leftover batter, so people make extra waffles and pop them in the toaster later. As waffles went gourmet, they got bigger and thicker and now don’t fit in the toaster anymore. The Dash Mini’s 4-inch waffle is the same size as an Eggo, but thicker and whole lot tastier. It’s a chore, but worth it to make extra waffles on Sunday so you can pop them in the toaster and enjoy a quick breakfast during the week. You might consider getting two Dashes to speed up the process. They’re energy efficient at 350 watts and two of them together burn less energy than most waffle makers on the market.

There’s no browning control on the Dash Mini Waffle Maker, but none is needed. Before the fad of browning controls, waffle irons did fine: You plug them in, wait until the light goes off, pour in the batter. The Dash Mini cooks flawlessly to an even, golden color and a nice cripness, then shuts off. So if you want a darker waffle by leaving it in longer, the browning process is rather slow. (You’re better off to pop it in the toaster for browning.)

I tried the Dash Mini Waffler Maker in hopes of getting smaller, more aesthetically pleasing waffles for photographs. As you can see by the photo, it does this quite nicely. Dash also makes a mini griddle for those with a pancake fetish and grill, kind of a George Forman on pixie dust.

Get some waffle recipes.