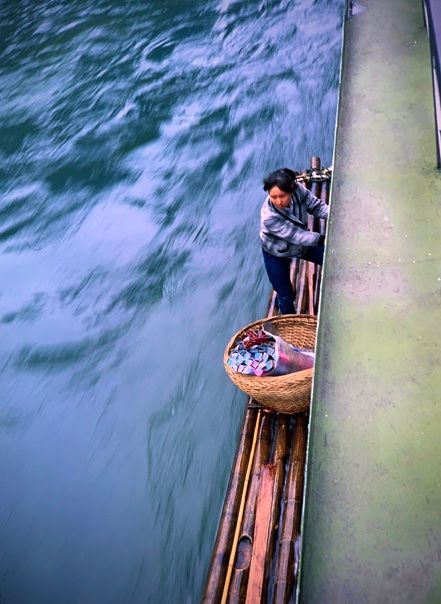 The tour boats cruised about 20 miles down the Li River from Guilin. It was winter and inside the unheated vessels, at the center of each table was a coal-fired hot pot. It looked like a mutant bunt pan, upturned and full to the brim with boiling chicken stock. The smoldering coal at the center of the dozen or so hot pots was the only heat on the boat and gave off its painful stench before slowly snaking out the open windows. Because everything in China was heated with small coal devices, every window everywhere was open in winter.

At lunchtime, the servers surround the hot pot with plates of raw fish, meat and vegetables. You’d use chopsticks to drop your chosen foods into the communal cooking bath of the ringed pan and then coral it so it didn’t mix with your neighbor’s. But most people weren’t inside.

Despite the cliche scenery of the amazing stone spires that jut from the Li, the real show was the tchotchke runners. Lurking in the reeds on the bank, these vendors posed as Cormorant fishermen. The bamboo fishing rafts would dart out and the runners would cling to the side of the boat. They’d open the fish basket, revealing large paper fans of all colors for sale. The vendors had less than a minute to make their transactions before the soldier on the boat would appear as they clung to the side and thwap their hands with a nightstick.

The runners would start at $5 or $10 and the tourists above would try to bargain them down to a buck. The tourists thought they were getting a great deal, because the soldier was approaching. What the tourists weren’t aware of was that the bargaining was factored into the sale: The vendors probably bought the fans for a few cents, so selling three fans for $10 total in unmarked American bills would probably feed their family for the day. The rest of the earnings were gravy.

The runners were well coordinated and would hit both sides of the boat at the same time making it harder for the soldier to shoo them off. When he thought he’d cleared one side he’d go to the other to find three vendors clinging there.

It seemed that some vendors were playing decoy, starting at the front of the boat, yelling to attract the soldier’s attention. Each time he’d swing his nightstick, they’d let go and grab on a few feet down the boat. The soldier would have to push his way through get a bevy of tourists looking over the side to thwap at the vendor’s hands again. Us tourists, being capitalists and all, would smile at the soldier, stand there and act like we didn’t understand what he was trying to do. The act gave the vendors a few more seconds to negotiate. As soon as the soldier would go to the other side of the boat, more vendors would dart from the reeds, grab on and start bargaining.

Neither the vendors nor the tourists had given any consideration to the fact that it was winter, the temperature was below freezing and nobody really needed a fan. I think the tourists just bought them for a buck or two because the tale they could tell was priceless.

Review: Two weeks with the iPhone 11 Pro cameras. Every year I tell myself that I’ll skip buying a new iPhone if the cameras don’t make a light-year leap. And this year…well…I ordered the iPhone 11

Throwback Thursday: The cascade at Gavarnie. Cascade du Gavarnie, July 1982 It had been an exhausting 10 days. Chuck and I had visited penpals near Luxembourg, in Bordeaux and Barcelona. They
All content ©J. Kevin Wolfe