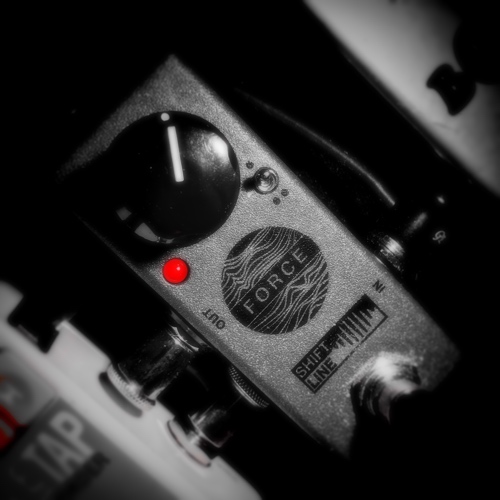 This cool little pedal from Russia takes the EHX Freeze concept and adds a modulated, high-feedback reverb along with options of sub/super octaves. Together these give three, exquisitely-tuned freeze effects a sense of depth and a nice, modulated quiver.

The only controls are a knob for effect volume (dry is always at unity gain) and a toggle to control the engage footswitch modes: Momentary, Classic on/off or Latch (tap the footswitch to resample). To change the voices, hold the footswitch while flicking the toggle. Reverb Freeze (sustain) is up, Gentle Roar (sub+super octave) is middle and Sub-Freeze (sub octave sustain) is down.

Though called the Freezeverb, this pedal is not intended as a replacement for your reverb. I think it works best early in the chain, followed by modulation and a “normal” reverb late in the chain.

The secret modes kick it.

There are also six hidden experimental modes. Most are latch modes that allow you to layer freezes, but my two favorites are a sub/super octave shadow reverb that swarms in under your playing and an infinite delay that compresses and degrades into the mush-o-sphere. Though The Force only gives you control over the output volume of the shadow reverb, it can sound like a harmonic ambient reverb at lower levels and cavernous chorus at hotter levels. The ambient delay is about a second long and compresses the feedback signal to unity gain. Louder sounds will repeat longer than quieter sounds. It’s really useful for laying down an initial beat, sound or chord which will slowly darken and fade. If you don’t record an initial sound, the compressor will amplify subtle signal and circuit noise into a raging machine with it’s own rhythm. Try setting the Volume knob to 11a for a rhythmic soup. To be honest, I use these two modes more than the freeze functions.

To access hidden modes: Disconnect power > Hold the footswitch > Plug it back in > Release the footswitch. (You can also access these modes my holding the foot switch when you power on. The flashing LED indicates you’re in the experimental mode (as well as marks the length of the buffer).

To access the various modes: toggle and hold the footswitch and toggle. Shadow reverb and inifinite delay are both in the center position of the toggle. To turn the pedal off in this mode, tap the footswitch twice. To return to normal freeze modes, unplug the pedal and plug it back in.

Negatives? The only real criticisms I have of this pedal is that it doesn’t have a soft footswitch or a kill-dry option.

My take: The Shift Line Force is useful as a sustainer pedal, but can also create some beautiful ambience. Most players will probably only use it occasionally, so the small size and tiny power requirements make it practical to keep on your pedalboard. The EHX Superego+ and the Hologram Infinite Jets do more, but their large real estate may keep them off your board. I like the sounds the The Force creates over the drone sounds produced by either of these pedals. It’s a gently-modulated ambiance that varies from organ to choir—always earthy, yet otherworldly. While you don’t have much control over the sound itself, the volume level plays a big role in how peaceful or angry the effect sounds.

You can use The Force for sustain (Reverb Freeze), ambient accompaniment (Sub-Freeze, Gentle Roar or infinite delay), as well as deepening the well of your reverb (shadow reverb), so you might find yourself using it more than you think. It can also be fascinating with effects, like an auto-swell pedal before or the Neo Mini Vent II, Rockett Tranquilizer or a formant filter like the Sub Decay Vocawah after. Here’s a demo of the Vocawah. The Force is 9v and burns 70ma.

UPDATE on difference in v1 and v2: v1 of the Force lacks the Gentle Roar effect, the Classic footswitch mode, but has four secret modes including the shadow reverb and the infinite delay. v2 sounds a bit more hi-fi, but I don’t feel the addition of Classic mode or Gentle Roar is worth the upgrade to v2 for my purposes. All pedals sold by Shift Line since January ‘18 are v2. The only physicvla difference in the two pedals is the toggle is 3-position on v2 and 2-position on v1.

Crap-Free Pix .com now part of wolfewithane blog. My book, the Crap-Free Guide to iPhone Photography was first published in 2015 and updated regularly for new iPhones and changes in the iOS. This
All content ©J. Kevin Wolfe